First Time Before an Audience

Senior Swingout was an end-of-school-year tradition at Cherry Hill High School in Inkster, Michigan. Dedicated to the senior class of their year, it was basically a talent show, by seniors, for seniors. Almost anything goes was the mantra back then in the late Sixties, though pretty tame by today's decadent social norms. The school auditorium was confiscated by seniors with the tacit approval of the administration and after lunch any member of the Senior Class could make their way to the SouthEast corner of campus and claim a seat and wait for the party to start.

Since I was a senior only one time I can't attest to how mild, medium, or hot and rowdy things got in years previous, but 1970 was to be a notable year for me, as I somehow overcame my crippling shyness and with Yamaha guitar in hand walked on stage with friend Gary Starin to play Simon & Garfunkel's "Scarborough Fair / Canticle."

By that time, 1970, I had been playing guitar for maybe 3 or 4 years. Even some years earlier I found a box under my folk's bed in which was a plastic ukulele, a device I found fascinating in spite of the plinkety plank plunk of the strings. There was also a felt pick that must have been 3/8 inch in thickness, its inflexibility defeated its purpose. It wasn't too long after,

my parents noticing my interest, gifted me with my first almost real guitar, a Harmony Stella acoustic steel string, model 929. I remember drooling over those Harmony guitar catalogs and they must have confiscated one to see if there was anything inexpensive enough to get for me (a child number 3 of 8 kids) for the 1965 Christmas gifting, because one was soon in my hands. By the time of the Senior Swingout I had grown into a Yamaha acoustic, which I deluded myself into thinking it sounded just about as good as my younger brother Bill's Martin D-28 which he bought around the turn of 1970 for $350.00 - and which I bought from him around 1976 for the same price when he needed cash to go hitchhiking around the country.

But I'm getting ahead of myself.

My guitar heroes in the late '60's were the likes of Gordon Lightfoot, the aforementioned Simon & Garfunkel, and the Beatles, all whom I emulated, buying their music books and records, as well as Eric Clapton (seeing Cream in October of 1968 in Detroit was a highlight of my teen years), and Ian Anderson of Jethro Tull whose Thick as a Brick is to me the pinnacle of intelligent, artistic, and just downright gorgeous rock n' roll music. I felt so proud of myself as a 16-17 year old for figuring out the precise finger-picking of "Scarborough Fair / Canticle." Playing a record over and over and over (driving my Mom nuts, I'm sure, while Dad was away at work) slowing down the turntable a bit so I could pick out the notes, was my main method for learning a guitar piece. Then The Ventures - my real idols - developed their "Play Guitar with The Ventures" series of records which my brother Bill and I bought and I could pick up a few more tips! My Mom let me rent for a summer a Guild cherry red solid body electric guitar!

It wasn't purchased. It was fun but I was an acoustic child at heart. My folks also let me rent a drum kit one summer, gluttons for punishment I suppose, bless their hearts!!!

Back to that summer afternoon in 1970, Gary and I walked on stage together with our steel string acoustics, my Yamaha, I don't remember what he played. I had been playing the song for a long time so I knew it by heart and we practiced it together a few times for the harmonies and familiarity with each other. I don't know if Gary played much or at all in front of people, I certainly had not. Hardly even played for the family if I can remember correctly, at least up to the middle of 1970. But I don't really remember having anything like debilitating panic when I looked out on what seemed those hundreds of kids. Gary and I just strolled out there and did our thing and I must admit it turned out pretty well.

Then came what is known in the papers as "burying the lead." I told Gary, "after we finish you go ahead and leave and I'll stay for one more number." I probably told him what I was going to do, but the audience had no idea. I sat up a little straighter on the stool and began the common 3 chord intro, G, C, D, in Tom Paxton's Talking Vietnam Potluck Blues. As some may remember those raucous days of the 60's and 70's there were a couple big things stimulating the nation. One, this skirmish on the other side of the world where the US was sending soldiers by the boatload, to the dismay of most anyone under 21 years of age; and, Two, to most parents it seemed, there was this recreation their youngest kids were discovering: marijuana. I know you won't believe this, but it is true, I was pretty clueless as a high school senior when it came to drugs, and considering my D minus academic average, most other things as well. But I did hear Paxton's "talking" tune and thought it amusing, so I had the idea to follow the lovely Simon & Garfunkel tune with this one though I lacked the insight into the repercussions of the war and drugs at that time. But that would change shortly after graduation.

I'll let those of you stop here to listen to the original performed by Paxton here in case you don't recall the lyrics. I'll wait for you on the other side.
Tom Paxton 1971, from Best of, I Can't Help But Wonder Where I'm Bound
To be frank I really don't recall the reaction from the audience when I finished, whether there was hooping and hollering, or whether there were sudden matches igniting rolled implements of weeds and wafts of smoke billowing towards the ceiling. This still was an Administration chaperoned affair I should stress. But again, I played the piece like good ol' Tom would have enjoyed, and it came of without a hitch, and I made my exit, feeling pretty satisfied with myself, and still able to graduate without censure.

As I hinted a few words ago, after graduation I was inducted into the world of nightly partying. Some friends had a friend whose father owned a local party store, and we all thought that "Party Store" meant this was the place where you enter the back room and party, consuming the beverage of one's choice, namely beer. Which is what we did. Until after an hour or so the friend kicked us out - it wasn't really legal then, or now, and they wanted to stay in business. It was that early winter when I was enticed to smoke some of that wacky weed - marihuana. When it first hit me I had never felt anything like that EVER! The word WOW said it all for me. And from that moment on I continued smoking to re-experience that same feeling to that same degree. I tended to get a bit carried away with that sadly.

After six year partying, drinking, smoking dope, and a reluctant two year stint in the US Army, I became a born again Christian. Walking next door to smoke a joint with my neighbor while his brother-in-law was there telling him all about Jesus. I got a high that night in a way I never could have dreamed and realized the futility of the earthly smoke. My musical life and I changed dramatically from that moment on. After being away from any church since 1970, I went to the church which is where my neighbor's wife's attended (yes, THAT neighbor!) and eventually joined their choir. For the next few decades in church and at Bryan College singing in choir was my phenomenally rewarding musical experience, and even though I still played my Martin, and to a lesser extent, my Guild, it was in choir where I was blest. This past January I picked up my Guild nylon string again after about 10 or 20 years and determined to start learning beginners classical guitar while my fingers still can move - the arthritis is starting to have it's effect! But thinking back on my playing career, I have to say there wasn't much of one.

I recently read the article Growing Up With Steve Miller. It spurred my memories of the Senior Swingout impelling me to write all this. But the article was a fascinating read for a number of other reasons, one of which was the author's discussion of the effort and desire that it takes to succeed to the degree one's musical heroes mastered. What he stated can't, in my opinion, be understated, and I highly recommend reading his entire article for the full effect of Steve Miller's impact on his life. But I quote the pertinent excerpt:

Five decades after Steve Miller released his first LP, he still practices singing on his bus, extends sound checks to the point of exhaustion, and pulls all-nighters to overdub thirty-second guitar parts. Steve's mentorship taught me something that I didn't want to learn: it isn't a quality that you're given but a question of how much you're willing to give. Whether you want to make high art or big-money chocolate cake, you have to be monomaniacally committed to getting there. You won't create music that's effortless or individual without giving your effort or yourself completely to it. And by that definition, Steve has it, and I clearly never did.

And clearly I also never did. But I see the wonderful classical guitarists on You tube and the dream automatically surfaces in my brain, "if only . . . .". Well, "If only" nothing! These talented people spend most of their waking hours focused on one thing, and the result for them, and for us the viewer, is worth it. They don't have much of any kind of life, I'm supposing. But, dang, they make musical chocolate cake! I was too lazy to even think about that kind of dedication. The casual hobbyist I'd remain.

One huge non-guitar but musical highlight was to sing on stage in 1993 (my wife Melissa in the choir too) in Carnegie Hall with one of my church's choirs when they were invited to be a part of the Jerry Blackstone's directorial debut. He was then the assoc. director of the University of Michigan's Glee Club and musician at our church. So in a way I can say that though to most it would appear my musical pinnacle was that evening on stage at Carnegie Hall in May 1993, singing Mendelssohn's Psalm 42, the time on stage that makes me smile the most is remembering Senior Swingout, singing/talking Tom Paxton's Talking Vietnam Potluck Blues. 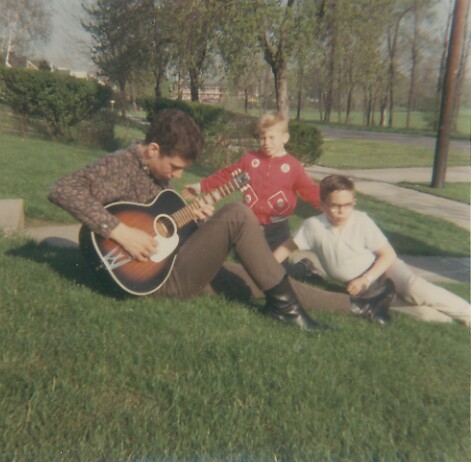 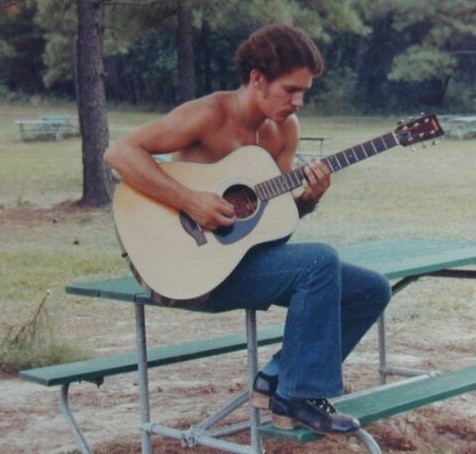 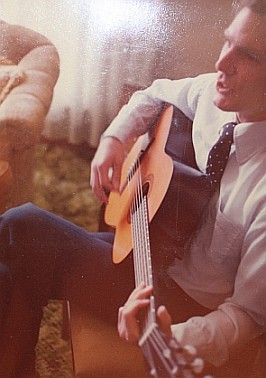 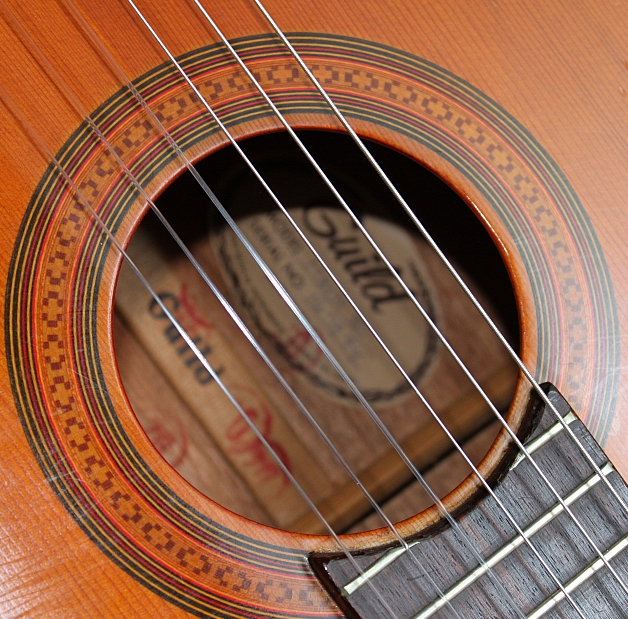 the rosette of the 1977 Guild Mark II. (click on picture for a hi-res 5.5MB copy to see better detail)